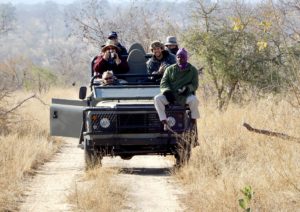 Safaris are often incredibly exciting!  We found a pack of 7-10 wild dogs in Sabi Sands and sat with them for a few minutes. Wild dogs are an endangered species, so it’s always a special treat to see them.

While watching the wild dogs, we heard hyaenas making loud and exciting sounds not far away and decided to investigate.  As we got to the hyaenas, we saw there were at least 4 on an impala kill.  We spotted Hukumuri, a large male leopard, standing about 15-20 meters away from them. It was clear that the hyaenas had stolen the kill from Hukumuri, who just stood there disgusted, watching the hyaenas eating away at his prize. 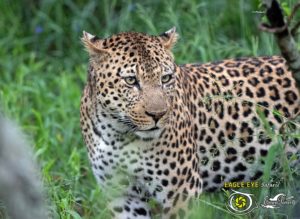 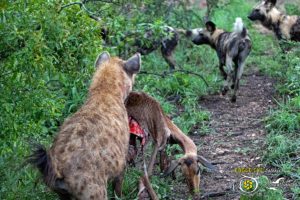 The hyaenas were very vocal as they fought amongst each other for the impala carcass. This got the attention of the wild dogs. The pack of wild dogs approached the scene and first spotted the leopard. They ran straight towards Hukumuri and chased him up the nearest shrub. It was amazing to see this massive male leopard trying to get to the tip-top of the tiny tree, and so unique to see him balancing himself on the thin branches. 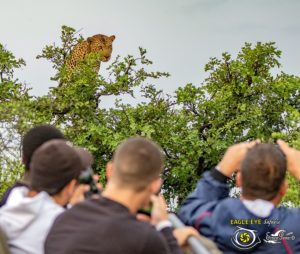 The dogs challenged the hyaenas for the kill. It was interesting to see that one hyaena stood forward and tried to keep the attention of the wild dogs while the other hyaenas were at the back in the bush with the kill. The dogs attacked the hyaena, trying to bite without getting bitten in the process. The hyaena did not back down and returned the attack by chasing the dogs. You could see that both species were very careful not to get injured. The sounds that came from this interaction were quite amazing. While the dogs and hyaenas were challenging each other, the male leopard got an opportunity to jump out of the shrub and flee the scene. 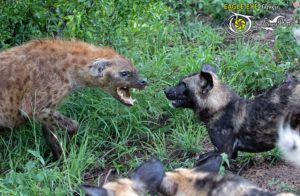 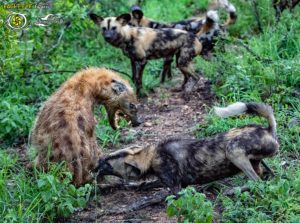 Eventually one hyaena came out with the kill and walked straight towards the wild dogs. As It approached the dogs, it stopped a few meters before the dogs then made a U-turn and disappeared deep into the bush. We love treating our clients to everyday wildlife adventures…won’t you book a safari and see for yourself?